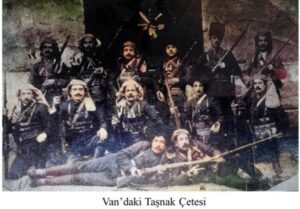 On the 106th anniversary of the vicious slaughter of 22,900[i] innocent Turks at the provincial center of the City of Van on April 21, 1915 by mutinous Armenian terrorists (Hunchak, Dashnak and alike), We, The Turkish People around the world, would like to commemorate our martyrs with compassion and love, bowing down in front of their honorable, loving memory with respect.

The VAN massacre originates from the mutinous attitude fanatical Armenian gangs acquired in the depths of history. Similar massacres committed by Armenians were witnessed throughout the Ottoman-Russian Wars of 1828 and 1877-78, due Armenians’ cooperation with the enemy, as well as other major massacres Armenians committed on their own.

During the early phases of these Russian invasions, aiming the realization of Russia’s historical ambitions, some Armenians who knew the region very well as Ottoman citizens and whose second language was Turkish, led the Russian forces into Turkish territories, causing them to raid Turkish forces and massacre many Ottoman citizens. Armenians have repeated similar practices in the VAN MASSACRE.

Due to the fact that Turkish men were engaged in the war efforts against invading enemy armies on six different battle-fronts during WWI, and that this situation created a vulnerability in the security forces of the region, Armenians who wanted to take advantage of this situation committed wide-scale massacres in Eastern villages and towns of Turkey, against the Turkish population. Armenians’ true intent was to reduce the numbers of the local Turks, and thereby increase the ratio of the Armenian population in the region, against Non-Armenians.

Once the Tsarist Russian Army entered Eastern Anatolia, taking advantage of this weakest time of the Ottoman State, Armenians increased their terror activities in the City of Van with the purpose of gaining majority in the population of the city, while once more helping the invading Russian Army. Their massacres in the region peaked on April 21, 1915, at the center of Van.

During these massacres where 22,900 Ottoman Turks perished, extremely cruel and inhumane acts of murder took place on the Akdamar Island where a historic Armenian Church is located; Armenian gangs also committed all sorts of immoral acts against Non-Armenians women and girls. Many girls and women ended up having to commit suicide by jumping into the Lake of Van in order to protect themselves, their honor and dignity against the Armenians’ sexual violence.

Perhaps the best response to the groundless Armenian claims came from the Armenian Republic’s First Prime Minister, Hovhannes Katchaznouni[ii], in his 1923 manifesto to the Armenian Revolutionary Federation’s (Dashnaktsutyun) Party Conference, in Bucharest. This manifesto of Katchaznouni, which has been removed from the libraries of the civilized(!) Western World by Armenian propagandists, blamed not the Turks but the Armenians as “the responsible party for the suffering of the Armenians”. He states that “the Armenians rebelled against their own state and committed treason by cooperating with the imperialist countries that occupied the Ottoman Empire”.

Based on documented archives and research of expert historian and demographer Prof. Justin McCarthy, we now know that 1,189,332 Ottoman Turks lost their lives in Anatolia during those years, mainly in the hands of rebellious Armenians.

Despite such true archival information, Armenian propaganda machine resorts to all kinds of intrigue and deceit, telling world public the biggest lie of all times – that 1.5 million Armenians were killed in the hands of Turks! They pursue policies similar to that of Hitler’s Propaganda Minister Joseph Goebbels. Every year, they engage in political activities to force the politicians around the world to pass meaningless, unbinding resolutions declaring April 24th as Armenian Genocide Remembrance Day.

On the other hand, we wish the sane, impartial and fair people of the world would at least ask themselves the very question that French historian Prof Yves Bérnard asked himself once, when he gave the following title to one of his books: “Génocide Arménien: Et si on nous avait menti?[iv] (Armenian Genocide: What if they have lied to us?)”.

According to the researches of Prof. McCarthy, apart from the human casualties they caused, the Armenian insurgents also destroyed all 3,400 buildings, except 3, in the province of Van, belonging to Turks.

With Regards and Respect,

[ii] Katchaznouni, The Armenian Revolutionary Federation (Dashnagtzoutiun) Has Nothing to Do Any More. Armenian Information Service. 1955.

NOW WHAT? TURK, RISE AND DEFEND YOURSELF!